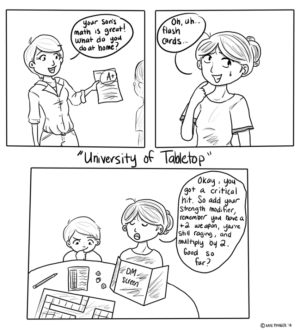 “You won the battle but lost the war.”

We’ve all heard variations on this expression, but what does it actually imply? For me, it boils down to the idea that someone was too focused on short-term wins and not the overall purpose. But is that necessarily always a bad way to go? In essence, we’re talking about tactics vs. strategy.

Tactics vs. strategy is a core concept in game design theory and when done well, creates interesting dilemmas to puzzle out. Gaming is something I’ve been passionate about for a long time; I self-published my first game in high school. In college, I was an active member of ISU’s chess club. In law school, I managed a game store and started designing my second game, The Bermuda Crisis: Discovery Dawning, which I successfully crowdfunded on Kickstarter. I’m a former state champion in Magic: The Gathering (a game with an estimated active player base of 12 to 20 million). We as a family have over 150 board and card games and play a few times a week. As a father of two young boys, I firmly believe gaming is a tremendous boon for developing math, reading, and problem-solving skills. Above all else, it’s just fun!

Tactics and strategy obviously have real-life implications beyond gaming and war metaphors. In sports free agency, you often see a team “selling the farm” to pick up a key player to win now. Take for instance the Houston Astros sending three key prospects in 2017 to the Detroit Tigers for 34-year-old pitcher Justin Verlander, who was arguably on the latter years of his prime. The move worked though, as the Astros went on to win the World Series.

Other times, focusing on the present costs you dearly in the end. This happened recently on the global stage as U.K. Prime Minister Theresa May called for a surprise general election. The idea was to bolster her position leading up to Brexit negotiations by increasing her slight majority in parliament. What resulted instead is her party lost the majority, resulting in a hung parliament.

Both the Astros and Theresa May took calculated risks, resulting in opposite outcomes. The best kind of games allow let you do the same thing on a much smaller scale. Here are some of my favorite examples:

End-game triggers: some games finish when a player triggers some condition, causing point scoring to begin. One strategy is to press your moves hard in the beginning, hoping to hit that trigger early. When it works, you’ll win and leave your opponents with a handful of unused resources. When you lose, you’ll be stuck with nothing and will die a slow death.

Engine building: one of my favorite genres is “engine” or “tableau” building. Every player focuses on creating their own personal system of generating various outputs, such as extra resources or victory points. In the game Brass: Lancashire (pictured below), you’re faced with the challenge of creating small point producers early and efficiently, or spending several turns developing bigger production mills that might never pan out. It reminds of a fun business quote, “good, fast, cheap: you can pick only two.”

Brass: Lancashire is a popular game based on industrial-era economics and employs several short & long term challenges for players.

Turtling: this is when you bunker down (think of the “Australia strategy” in Risk) and focus on defense while you allow the other players to battle it out or waste resources trying to get through your wall. When this strategy fails, it’s because the turtling player didn’t acquire enough resources to keep up with opponents and allowed them to develop their own schemes.

King of the Hill: this is the classic dodge ball decision that happens at the beginning of the game and in a way, is the opposite of turtling. You can rush towards the centerline (or in gaming, whatever the hotspot is) for key advantages that can compound quickly, but you’ll be left extremely vulnerable if it goes awry.

Often what dictates whether you go with a long or short term plan is how much information you can reasonably rely on over the course of the event; luck and the unknown greatly affect decision making. At one end of the spectrum, you have games like chess (zero luck) and on the other you have something like roulette (all luck). If you were to put games on a “luck scale” of 0 (chess) to 10 (roulette), I personally prefer games that fall around a 2 to 3.

And why is that? Why would you allow luck to play a factor at all? Doesn’t it rob your accomplishments?

I think a dash of luck in games creates some exciting moments – a key card being drawn off the deck, for example, can lead to cheering and fist pumping. The right poker read on an opponent is just as rewarding as the money you just raked in from them. But more importantly, I think it’s because those decisions where you played the odds correctly can often mirror real-life decision making, which perhaps provides deeper, more psychologically satisfying results.

It reminds me of a discussion I had in my undergrad about career choices with a friend who was focused on studying hard sciences. The liberal arts drove him nuts because it seemed there was often never a definitive answer to the questions professors asked. Interestingly, I found that’s the reason why I liked studying rhetoric. It’s the reason why I loved being on the debate team; you still have a framework and the better speaker will usually win, but the creative nuances you get to explore and implement are extremely rewarding when they pay off.

Such is the reality with practicing law. You have a framework (cases, statutes) but within those bounds you have an enormous amount of creative freedom (emails, motions, depositions, etc.). You have main objectives (getting clients medically and monetarily compensated) but what do you do on a day-to-day basis to accomplish those goals? Are you in for the long haul (court in a year or more) or can you provide a quick resolution (early settlement)?

The answers are obviously fact specific and case-by-case, but it’s critical to recognize your options and adjust your timeline with the changing winds. Here are some concepts I find to be very important:

Manage the entire case: a lot of big firms operate on a piecemeal basis. The high caseloads turns their business into an assembly-line factory making widgets instead of a firm helping people. This creates several problems because their employees don’t understand various aspects of a claim and simply play hot potato with the tasks they’re assigned. Subsequently, cases drag on until they’re passed off to a litigation attorney who’s likely overstressed and begins the process of patching holes.

Experience: this is a funny word because it often gets mistaken for age. However, I know several long-time practicing attorneys who have zero appearances in court. Older attorneys that don’t know how to use a computer or look up newly-enacted laws. Other attorneys who don’t really practice law and simply delegate tasks to assistants. Like putting NBA legend Shaq at the free-throw line, defenses will find the weak link in your game and attack. 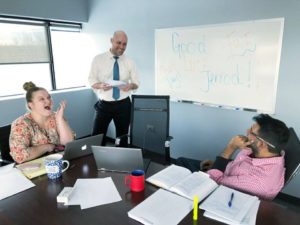 Work-life balance: This feels counter intuitive based on what I just discussed, but is critical to good work product. In one of my all-time favorite books, 7 Habits of Highly Effective People, Stephen R. Covey likens a person to a saw, stating that you are only as good as the teeth on your blade. “We must never become too busy sawing to take time to sharpen the saw.” Like spokes in a wheel, you must be solid in all aspects of your life or the entire unit will become unstable. How can you be a good attorney if you’re staying up too late at night? Not eating healthy? Constantly answering emails on your phone at home instead of playing with your kids? Your output will suffer.

Communication skills: while this is multifaceted, I’m specifically referring to communication with clients and opposing parties. The legal field is complex and usually longer than what people expect, so it’s important to update clients at key moments and explain details. It’s a short-term cost on your time and current projects but can yield long-term benefits. You must also be professional with the other side; settlements only happen when all parties agree on terms, so why would you disrespect them now and hope they’ll play nice later? As your grade school teachers said, maturity matters.

I find a lot of joy in formulating a plan and pulling all the levers to make it work. Games provide this wonderful arena where your brain gets to play engaging matches of tug-of-war with friendly opponents. Can I get them to commit their pieces to an overvalued objective? Can I convince them to trade me those cards, even though they’re suspicious it’ll complete my set? So many of those skill sets transfer over to life as an attorney and small business owner, which is why I enjoy coming into work and doing what we do. At home and in the office, tactics and strategies provide the backdrop to satisfying accomplishments and memorable experiences.