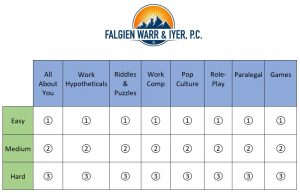 Recently, we shifted some staff around into different departments and as a result, had a work comp paralegal position open up. We quickly did what we’ve done with any new position, which is to post up an ad on Indeed. Historically, we would run the ad for a week or two and get a couple dozen applicants. This time, in the first two days we had around 200 applicants; at that point, we decided to pause the listing before the pool became too unwieldly to handle.

That was probably the first clue that this round of interviews was going to be unlike any other we’d been a part of in the past. We quickly got to work setting up the interview format, which would take place on Zoom. In our firm, we use Google and the Hangouts feature for our video and text chats, but figured this was a more common platform. Hey, if people can do virtual happy hours and silly office videos, surely they could do a job interview!

I was initially a bit concerned about the amount of subtle, interview bits we’d miss out on not having meetings in person. After all, interviews are so much more than what’s being said on the surface. However, in a weird and beneficial way, we were actually able to find out pieces of information we wouldn’t have otherwise noticed, so it ended up being more of a tradeoff then a strict situation of missing out.

Of those roughly 200 applicants, we conducted first interview chats with 23 of them. They were 30 minutes long and went over a lot of what you’d expect – work history, goals, legal experience, etc. They were fun but also a lot of work. This is not to complain; I think we all felt extremely fortunate to have the opportunity to hire someone in 2020 instead of laying people off. We also know how difficult it is for the folks looking for work right now; we have extreme sympathy for all of them. Still, imagine hosting 23 get-togethers, all while being short-staffed. It meant very long days for a couple weeks.

After that first round was completed, we conducted five second interviews. All of them were amazing candidates, and this is where things get interesting.

Since the position we were hiring for was a work comp paralegal, I took the lead on these knowing that the person would be working with me directly. In a normal year, our second interview process is where we’d invite people to lunch with the partners at a restaurant so we could eat and get to know them as a person – not just as an employee. That’s just as important as the academic side of a person.

Of course, you can’t meet at restaurants these days! That left me trying to figure out what a second interview with these five, amazing applicants should look like. I knew I didn’t simply want to conduct a second interview that mimicked the first interview but instead lasted twice as long. Soon into this brainstorm, I got to thinking about two related tidbits.

The first was the interview my partner Vinny went through at a previous job. It lasted over many sessions and at one point, he even took a personality test. I thought that was too extreme for this position, but in general found it to be an interesting and useful tool.

The second item was a memory I had about the infamous Microsoft and Google interview process. You can read a little bit about it here in this Forbes article. The one that always stood out to me was “why are sewer covers round?” Essentially, you’re making interviewees think on their feet and subvert normal, cookie-cutter interview tropes.

With those thoughts swirling in my mind, what could I do to make this second interview unique, fun, but useful for us and the candidates to know what they would be getting into? As I often do in life, I turned to games.

I decided to create a modified, Jeopardy-style question board. Here was the final: 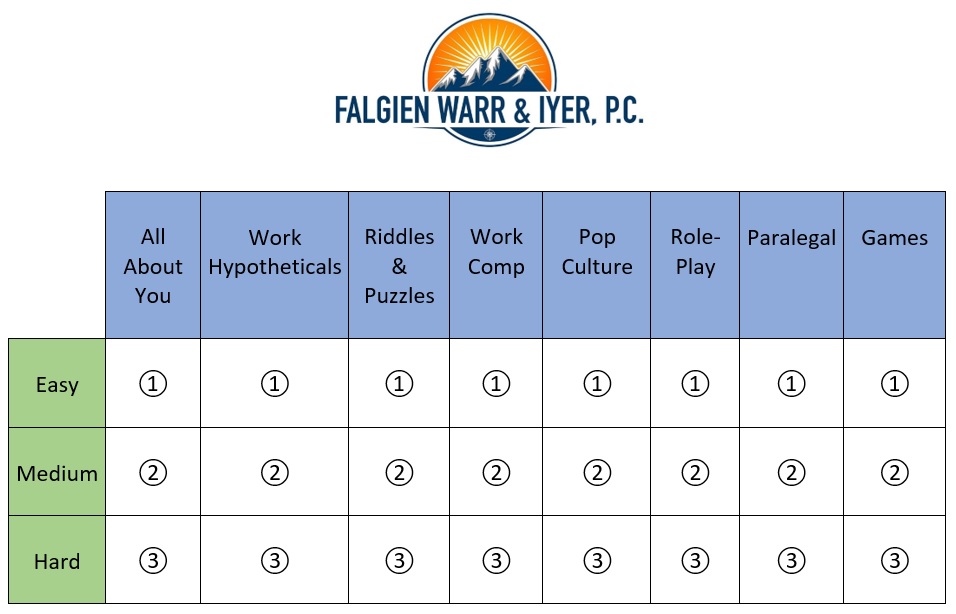 The rules were simple. The candidate would control the interview by choosing the categories and difficulties of each question. They had three, imaginary “tokens” they could cash in to ask us a question they had previously asked. They were told that some of these categories would involve pictures, some would be questions, and some would even require other, outside materials. They knew we wouldn’t get through everything so they should make choices based on what they most wanted to cover throughout the interview. We would then have the benefit of analyzing their choices and responses.

I had put this all together over a couple days. The night before the first one of these was to take place, I had major doubts. Just about every wrong scenario I could dream up kept rolling through my mind. I hadn’t even cleared it with my two partners (in part because I wanted it to be a surprise), so the only feedback I had was from my wife who basically said “this is definitely something you’d come up with.” Not exactly the vote of confidence I needed! 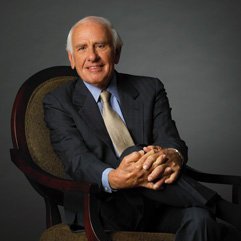 Throughout the tossing and turning that night, I ultimately came to the conclusion that it if it bombed in that first interview, we could all pretend it never happened – but at least we tried something new and different.

After all, doing things “our way” was always part of our mission in opening Falgien Warr & Iyer, P.C. We are willing to create new concepts, which occasionally means ideas don’t work. Jim Rohn, who was a great entrepreneur (and grew up in Idaho!) is quoted as saying “If you are not willing to risk the unusual, you will have to settle for the ordinary.”

Suffice it to say, that first interview went over quite well. We laughed, got to know one another in ways a normal interview would have failed, and hopefully had a memorable experience for each of us. It gave us the confidence to use the format in the other four interviews and each one netted the same, great results. The candidates all mentioned how “refreshing” it was to break the traditional, interview mold. They could have just been saying what they think we wanted to hear, but having gone through it myself, I’d like to think they were being sincere.

There were so many great candidates throughout the long application process. Ultimately for us at FWI Legal, we got a perfect new addition to our team and the workers’ compensation department. The game board experiment allowed everyone involved to better understand the personalities they’d be working with, and I’m grateful to be in a situation where people are allowed to express themselves. It fosters creativeness, bonding, ingenuity, and of course – refreshing experiences.