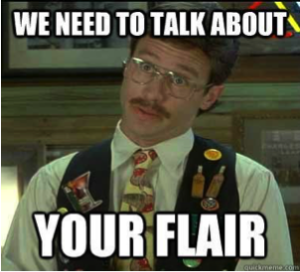 Culture is critical to a company’s long-term viability. That’s of course no secret; search “business culture” on Amazon and you’ll get over 30,000 hits. It’s often easier said than done though, as I’m sure we’ve all been at jobs where there’s a toxic vibe in the air and employees don’t feel they’re appropriately valued. I’ll never forget what my business professor, who used to work for a big construction company before teaching, said in law school one day: “often, these companies feel employees are a necessary evil because those at the top never feel as though enough is getting done.”

So how does everyone avoid bitterness and burnout in the office? How do you prevent team-building from feeling fake? There’s a constant push between getting things done and pull between overall well-being. In a law office there is always some task, research, phone call, or memo you can make. It requires a constant balancing act that really needs to adjust on a daily basis.

Normally, our general approach relies on handling little things in order to accommodate the bigger picture. Here’s a basic example. Let’s say an employee says “would it be okay if I ordered this special kind of coffee I like so we can have it in the kitchen?” Do you say, “Hey I’d love to, but we already have a few flavors in there which kinda take up a lot of space, the cost could add up over time, not many people like that blend…” and so on. Or do you say, “Yeah, go for it!” 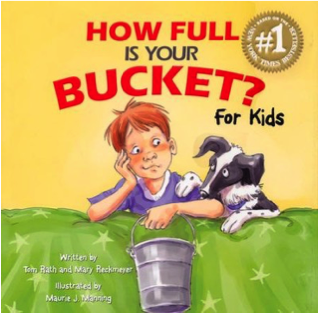 Some lessons are applicable for life

We do our best to take that second method. We are far from perfect, but we actively acknowledge the importance of this principal. As my six year old son learned in school, when it comes to relationships you’re either being a “bucket filler” or a “bucket dipper.” I’ve heard this analogy presented as making bank withdrawals or deposits, but the idea is the same – goodwill is built up over long periods of time and directly impacts relationships. Negative interactions are usually far more costly on any level than positive ones. In the video game Dragon Age, you’ll see this represented as an on-screen “approval meter,” so you constantly know where you stand with someone; if only it were that easy!

Ultimately, it’s about not nickel and diming people to death and seeing the forest for the trees. Don’t ding someone because they came in late on a given day; be happy for them when they ask for the afternoon off to attend a charity event; say hello in the morning and really ask them how they’re doing. Show them they’re appreciated when they do a good job and hopefully they will notice and reciprocate.

We put trust in the employees we hire and bring into the FWI family, which is why we do things like unlimited PTO. Just sitting in front of a desk from 9:00 to 5:00 means nothing; it’s about progressing claims. So if that’s the priority, then focus on that – not arbitrary, archaic office rules.

Now onto some of the more fun stuff! Here are some specific examples of what we’re doing to create an enjoyable atmosphere. 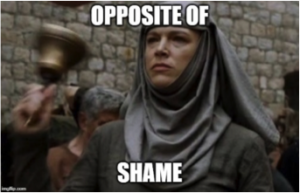 Season 8 of GOT is still a hot topic at FWI

I don’t even remember how this started, but it goes back to an old conversation Brianne and I had about how fun it’d be to have a physical manifestation of good news. We eventually decided on installing a bell in our copy room that people literally go in and ring when something like a settlement or favorable judge order comes through. Then everyone in their individual offices has hand bells they ring in response as if to say, “I hear you my friend and I’m cheering right alongside you!” It’s cheesy, fun, and impossible not to smile once you hear the ringing. 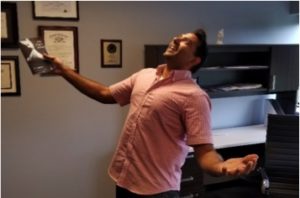 A totally legit moment where Vinny realizes he got bamboozled

Imagine walking into a lawyer’s office and seeing their collection of books. All the usual suspects are there: a Bluebook, Medical Guides, Federal Statutes, and 50 Shades of Grey?! You’d probably make a mental note on the personal reading preferences of the lawyer but think, “hey, whatever floats your boat.”

What’s happening in reality is there’s this constant, ongoing battle behind the scenes of a person casually glancing over to their shelf, seeing FWI’s now infamous 50 Shades of Grey book, thinking “dang it – how long has that been there?!” and then going to sneak it into the next victim’s office. It’s like an uncomfortable game of hot potato you get to experience every other month, and the kind of harmless prank that helps us feel young.

Remember how fun pizza party days were in school? Maybe it was paired with games like Heads Up 7 Up or Charades, and everyone just had the opportunity to cut loose. Well, we remember those days fondly and have them here every so often.

If you’ve seen my office or read a previous blog of mine, you know I love games. Whether it’s a brain burner or filled with laughs, I enjoy sharing games with people and fortunately I have the opportunity to do that here at the office. It’s a nice opportunity to bond and always leaves us with memorable stories. If you don’t believe me, ask Brianne how tall the Hollywood sign is! 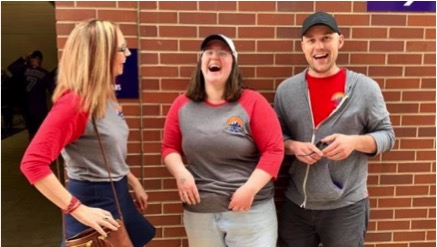 We had a conversation that kind of went like this:

Person A: Hey, we should go to a Rockies game this year!
B: Totally, that would be a blast!
C: How about opening day, lol
D: Yeah, those tickets are kind of tough to get and pricey.
E: Maybe not… we should check into it.

Sure enough, we made it happen. We blocked the entire day off for it and had such an awesome time. Everyone worked hard beforehand to make sure we could really enjoy the day, and I’m so happy we did. We’ve had other, similar activities as well. Halloween here means dressing up. During Christmas we wore ugly sweaters and hung out at Round One for karaoke, bowling, and a gift exchange. Previously we’ve put our wits together to make it out of an escape room at Conundrum.

Some of these activities have required us to get out of our comfort zones and try new things. But isn’t that one of the hallmarks of a good relationship anyway? I look forward to more of these events in the future… my vote is for Cave of the Winds and Rugged Maniac!

I believe if a person wants to be happy and healthy, that needs to be the case in every one of their roles. We are lawyers, mothers, brothers, paralegals, musicians, and a lot more. Everyone spends so much time at work that it’s critical you know you can come to a place that feels like home. The work we do isn’t always easy or pleasant, but it’s much more manageable when the culture is healthy and everyone is constantly working to make it better. 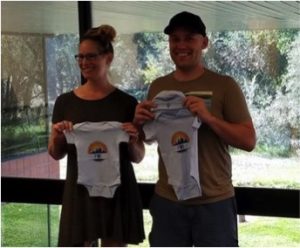 When it’s all said and done, it’s about family.